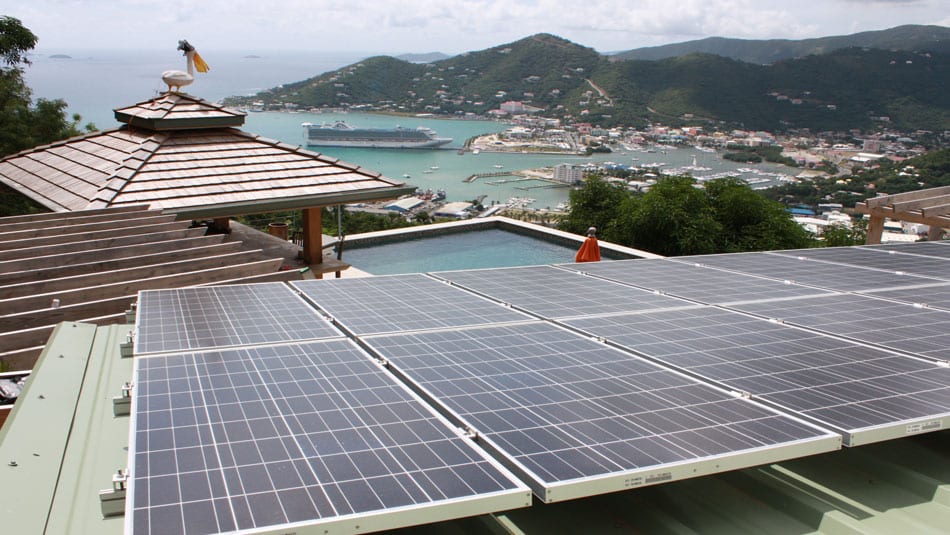 The British Virgin Islands Electricity Corporation (BVIEC) is the sole provider of electricity in the BVI. On Tortola, power is primarily produced at the Pockwood Pond diesel generator, supplied at 110V. Government have made significant moves toward promoting energy conservation and are investigating alternative energy sources.

Currently, power generation is governed by the BVI Electricity Corporation Act, which states:  “…No person other than the Corporation (BVIEC) shall use, work or operate or permit to be used, worked or operated any installation designed for the generation of electricity or the supply of electricity to or for the use of any other person, except in accordance with the terms of an authority issued by the minister.”

This legislation was originally penned to ensure sufficient revenue to fund the BVIEC infrastructure and prevent hundreds of residents from installing their own generators—but it also inadvertently restricts the implementation of renewable energy as a primary source to any resident living within the BVIEC grid. However, alternative energy can and is used as a secondary form of power among residents living within the grid system. You’ll notice some homes with solar panels to power water heaters thereby reducing power costs. Off the grid—mainly on sister islands—exemplary work has been undertaken in the renewal energy field. Resorts such as Cooper Island Beach Club, and those on Peter, Mosquito, and Eustatia islands have all invested in renewable energy supplies. The hope is that this trend becomes commonplace and necessary action is taken by lawmakers to amend this legislation.

Most homes in the BVI collect rainwater, that is then stored in cisterns as their main water supply. Contact the Environmental Health Department for tips on how to keep your cisterns, and water supply, clean and healthy.

Trash collection service is limited and each district representative is tasked with hiring private contractors to collect and dispose of solid waste. Residents are expected to deposit their waste in metal dumpsters that are situated every mile or so, on the roadsides. On Tortola, you’ll often see the loud, diesel dump-truck barrelling down the road en route to Pockwood Pond where the collected waste is dumped in an incinerator and burned.

The BVI has seen a three-fold increase in waste volumes over the last decade with waste within the Territory being either landfilled or incinerated. Four unlined landfill sites are currently in operation (Tortola, Virgin Gorda, Jost Van Dyke and Anegada) with open burning unfortunately a common practice. Because of the BVI’s size and rolling terrain, landfill engineering is difficult and expensive. No recycling facilities are currently in place although plans are underway to develop a viable recycling system for the BVI.

Roughly 12 percent of the waste stream is glass. According to previous studies, 3.8 million bottles were imported into Tortola in 1996, resulting in 1700 tons of glass received at the incinerator that year. Glass waste poses a unique problem in the incineration process in Tortola. Each year the incinerator is shut down for approximately twenty days, during which time the Solid Waste Department staff must enter the incinerator and manually chip off the glass that has melted onto the incinerator walls. During this “offline” period, incoming waste has to be stored, or burned, behind the incinerator—resulting in health hazards, such as flies, vermin and toxic emissions.

To improve the safety and health of waste department workers and all residents and visitors downwind of Pockwood Pond, it is strongly recommended that glass be removed entirely from the waste stream. If achieved, it will have the additional benefits of reducing downtime and damage to the incinerators.

Virgin Gorda’s recycler is installing a glass imploder that will manage large volumes of glass waste. The end product is an aggregate that can be used in roads and other construction applications.

Green VI’s Glass Studio, in Cane Garden Bay (opposite Myett’s Bar and Restaurant), converts discarded glass bottles from Cane Garden Bay restaurants and bars into a range of beautiful artistic and functional products such as jewellery, drinking glasses, decorative bowls and vases. The next phase at the studio is to convert equipment to run on biofuel derived from used vegetable oil. This will serve as a further demonstration of ‘waste’ as a resource. For more information, visit greenvi.org

In addition, there are several other for-profit business that are recycling glass such as Greencrete in Virgin Gorda (www.facebook.com/greencretebvi) who makes home gifts and concrete and glass counter tops and Nutmeg Designs (www.nutmegdesignsbvi.com) in Road Town, who up-cycles glass bottles into hand soap dispensers and lighting.

Plastics unfortunately make up the highest percentage of litter found in the BVI. They contribute to the blocking of drains and increase the risk of flooding while also killing marine life through strangulation and ingestion. Plastic bags in the ocean look a lot like jellyfish, which are a main food source to many marine animals. Plastic bags, once ingested, create blockages within the digestive system that eventually leads to death. Plastics take 1000 years to photodegrade. They break down into smaller fragments that soak up toxins. These tiny particles of plastic do not have the ability to biodegrade and therefore contaminate soil, water and living organisms forever.

Worldhouse Caribbean and Green VI collaborated with the major grocery stores in the Territory to voluntarily ban the plastic bag. The aim is to reduce litter caused by the ‘free’ bag and to encourage a culture of reuse and optimal use of resources. The establishments that joined the movement charge 15c for bags in an effort to encourage the end user to bring their reusable bags with them.

Reduce the amount of plastic you use and say ‘no’ to polystyrene containers for hot food and drinks. Plastic molecules leach into food and beverages and end up in your system with negative health impacts. Ask vendors to use compostable of plant-based, products instead. These are available from Green Technology (http://www.facebook.com/greentechbvi).

The recycling of derelict vehicles is currently undertaken by a private recycler, Floyd Stoutt. He has a car crusher in Sea Cows Bay. Scrap metal is then shipped off to be recycled. It is hoped that soon our aluminium and steel cans can be collected and recycled.

According to Charlotte McDevitt, Executive Director of Green VI, 30-40% of the waste thrown away is compostable, organic waste—banana peels, avocado skins, lettuce stems and other food scraps—from homes and businesses. The tropical climate in the region is perfect for composting because the heat assists in the decomposition process. One of the simplest ways an individual can help with waste management is to compost.

For most people, the thought of composting seems difficult and unmanageable, however composting can be easy, healthy and unintimidating. Check on-line to find a composting system that suits you.

Salaries in the BVI