A Surprising Sport to Dart into the BVI 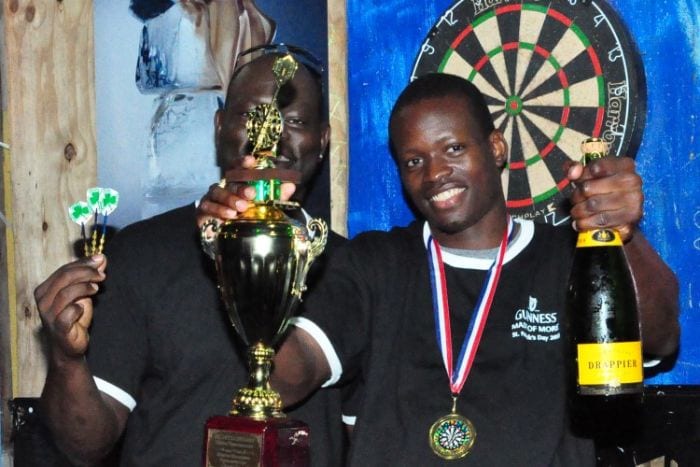 Y ou may have seen it already. You may have queried its existence here – how did this sport arrive so randomly? When did it get here? And why is it so popular?

Among the rapid developments that the BVI is making in diverse activities available–the helicopter charters and zip-lining located in north Tortola for examples–some might have questioned why darts, a sport unrelated to the water, climate or the location of the BVI, has romanced the island and now lives in blissful harmony with its diverse range of residents.

Elwin “Dj Dolphin” Lee would tell you that darts is a sport that wields no prejudice toward an individual’s gender, age, strength, weight, physical fitness, or the bulk of your wallet. “This is [a] sport that brings everyone in the BVI together, no matter…” he said in reference to the diversity of people attracted and playing in the numerous events exhibited across the island.

Recently speaking to Elwin, a head motivator responsible for the resurgence of darts in the BVI, he explained that we are about to witness a whole year since the sport’s resurrection and rapid popularity spurt: “The craze started last December 12 2012 as a charity fundraiser to benefit VISAR, which was a huge success,” said Elwin. Subsequently, the allure of darts on this single occasion instigated regular occurrences for players and fans of the sport.

Elwin further explained the history of darts in the BVI, revealing that it was the no.1 sport in the region for an extended period, but disappeared over the last 10 years. “[The BVI National darts team] played the sport for years and have represented the biggest stages,” said the avid darts player with regard to Caribbean tournaments that the BVI previously participated in. Currently, the BVI has seen 20 tournaments with competitors vying for cash prizes, a variety of excursions, trophies and medals. With teams partaking in tournaments for a nominal fee, Elwin imparted that the most anticipated prize was a trip to Jost Van Dyke’s Soggy Dollar–of course accompanied with a complimentary renowned Painkiller. Elwin harbours optimism that with a sufficient following and sponsorship, darts will expand exponentially in the BVI and eventually return to its rightful status as a sport played on a national scale.