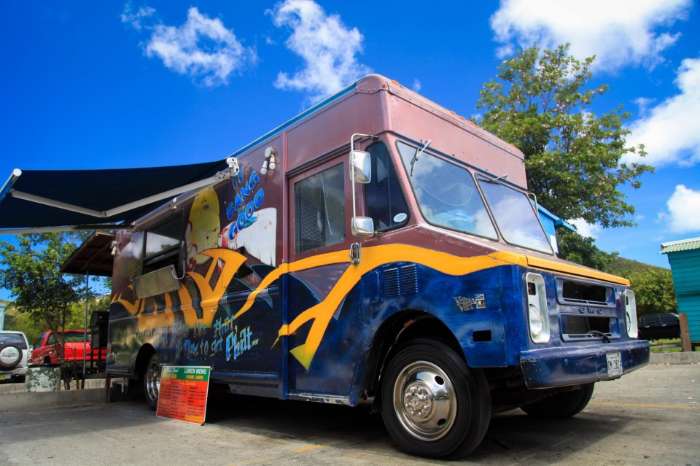 In the BVI, restaurant and eatery options can often seem on the short side, especially when hunger hits at a late hour. Without McDonald’s or Burger King to calm a craving for quick food at odd hours, some proprietors in the territory have opened up shop at various street sides around Road Town. They often open late and serve quick food from a renovated diesel guzzling beater. The popular locales are often craved long after leaving the island. After a month of voting, readers have decided which chicken buses–or roadside BBQ restaurants–top their list for the best of the BVI.[/two_third_last] Located in the parking lot near Village Cay Marina, It Bang Good won favour with readers who have a hankering for fall-off-the-bone BBQ and spicy-hot dove pork. The parking lot fare services the surrounding businesses with hearty portions of mains (chicken, ribs, dove pork [on Friday night]) and the kind of sides that grandma used to make. They’re open from lunchtime and usually stay open until about 8 pm. Located at the edge of the Road Town Softball Field and across the street from Elmore Stout High School, Dareo’s draws a mixed crowd of students and adults who rush the roadside “bus” (actually a standing structure) to indulge in the varied and delicious menu. It’s better to hit Dareo’s before or after the midday rush (before noon or after 1pm). I ask for extra BBQ sauce on my chicken or ribs–I can’t get enough of that tangy goodness. This street corner chicken bus sits at the same location as former bus, Shaniq’s. Panche’s has stood the test of time in its close vicinity to the Road Town Roundabout, probably because it stays open so late that it draws in customers looking to line their stomachs after a long night out at the bars. When I go to Panche’s, I order fried chicken and french fries, served in a styrophome box, and I douse them with a mixture of sauces. Next, I close the lid and shake, making a devious salad of crispy deliciousness. They also serve goat water and sometimes salt fish. I’d suggest phoning ahead, but the phonebook unfortunately missed Panche’s number. Nito’s is well known as the pioneer chicken bus in town. Serving a loyal clientele for a couple of decades, this renovated school bus opens up with greasy deliciousness at around the same time the bars start to pack up–and it stays open long after they close their doors. I personally think Nito’s has the best goat water around. Nothing says comfort food better after a late night out in Baugher’s Bay than Nito’s.

Perhaps the least known chicken bus in town, The Pit is my personal favourite. The tiny blue bus opens on Friday and Saturday nights at the southern corner of the Roundabout. I have fond memories of eating grilled lobster on a Styrofoam plate while sitting curbside. The Pit does amazing BBQ, but expect to pay a pretty penny for its awesomeness. The Pit is only open two nights a week, so catch ’em while you can!

Did we miss any chicken buses, or late-night eateries? Let us know your favourite in the comment box below.

ABORTION PILLS FOR SALE IN BAHRAIN +27640211696 ^MANAMA CYTOTEC PILLS IN RIFFA ABORTION PILLS FOR SALE IN BAHRAIN +27640211696 ^MANAMA, HAMAD TOWN, MUHARRAQ CYTOTEC PILLS IN RIFFA MIFEPRISRTONE & MISOPROSTOL PILLS AVAILABLE IN JUFFAIR In Saudi Arabia Dr. Joy 【+̲27640211696 】@0))][(WHATSAPP FOR ABORTION PILLS FOR SALE IN SAUDI ARABIA, CYTOTEC PILLS IN SAUDI ARABIA QATAR MISOPROSTOL AND MIFEPRISTONE PILLS IN RIYADH, ==MECCA JEDDAH MANAMA RIFFA & “Safe Abortion Pills by `Dr. Joy . In Juffair .__  【27640211696 】#  ..__SAFE TERMINATION PILLS in Hamad Town PARK, Jubail, Qatif, Kuwait` City, HATFIELD  (((+27640211696 )))$  ABORTION PILLS FOR SALE IN south Africa CALL DR JOY  ₊27640211696 ) ))  +27640211696 1& ______ ••• +27640211696 •••(  ____________ Our Medical Abortion Clinics are legalized With modern and well equipped primary health care facilities to provide you with a private and safe environment. You have to make the right decision because we believe that this issue is sensitive  and confidential. We are proud of our reputation of being a medical abortion clinic that treats each patient with distinctive care and respect. We specialize in Medical Abortions use Clinically approved pills to terminate the pregnancy, Same day, Pain free without any complications and our services carried out by qualified doctors and nurses who make sure everything works out properly and safe. Our affordable abortion prices will suit your needs, Students get 25 % off the standard prices. CALL OR WHATAPP NOW. Dr Joy ..__ +͎27640211696 & MISOPROSTOL PILLS AVAILABLE IN JUFFAIR