Why Getting Sick in Paradise Sucks the Most 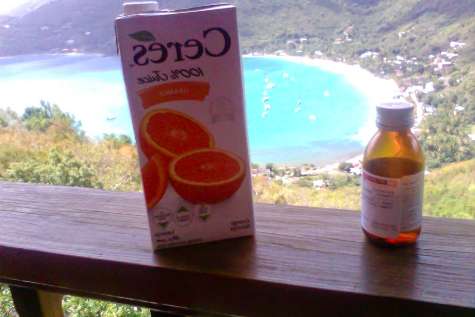 It’s no fun being sick anywhere. But I wager it’s even less fun being sick in the BVI. I write this as the cold yet soothing burn of Vic’s Vapor Rub calms my aching lungs, tired from a long night of phlegm-producing work. From my porch I have a clear view of Cane Garden Bay, which acts as an amplithetre for playful beach-goers and beach-bar musicians that start around 5 pm. It’s usually a pleasant reminder of all that is fun and beautiful about living here. But today, it sucks. Today, I watch from a distance–cough syrup in one hand, OJ in the other–at home with bronchitis.

The flu, the common cold and it’s phlegm-producing bully of a brother bronchitis are torturous ailments to have as a resident or visitor to a tropical destination like the Virgin Islands. The warm weather, bright colours, whispering palm fronds, lapping waves–it’s times like these I wish this things had a face so I could punch them in it. But I digress. Today, my misery loves company, and for the same reason got me thinking about some of the uglier illnesses that have plagued the territory over the years, and those that continue to thrive. Living on a small island–where visitors flock by the thousands almost daily–the threat of sickness and disease is real. I don’t mean to freak you out or anything, but I’d like to take this opportunity to highlight some of the ugliest ailments to afflict the territory.

This infectious, tropical disease is a nasty one. More than a handful of my friends have been stung by this nasty bug–some hospitalized. Symptoms include fever, headache, muscle and joint pains and skin rash. In some cases, diseases can develop into life-threatening dengue hemorrhagic fever, resulting in bleeding, low blood pressure levels, low levels of blood palettes and blood plasma leakage.

Dengue is transmitted by mosquito–which you have probably realized fly in abundance here. There’s no available vaccine, and treatment is limited to hydration or intrevenous fluids and blood transfusions in more severe cases. Here, it’s important to safeguard our properties from areas susceptible to mosquito breeding, like areas or containers that hold standing water. Furthermore, cisterns should be sealed with concrete and downspouts covered with mosquito netting, cloth, plastic or another suitable cover.

Over the summer of 2012 and into the winter, reports of dengue skyrocketed. In November, news reports indicated that there were up to 70 reported cases territorywide. Even though that number seemed higher than recent years, I had my suspicions–after hearing about 20 or so cases involving friends–that the number could have been significantly higher. The notorious Influenza A Virus — type H1N1 — filled the world with panic when it reached pandemic levels in 2009. By 2010, the virus had caused over 17,000 deaths worldwide, according to the Worldwide Health Organization. Particularly hard hit was Latin America, with Mexico suffering from one of the highest rates of infection in the world. In the BVI, we also had an alarming scare, with a reported 59 suspected cases terrritorywide. Living on a tiny archipelago, this staggering number brought fear to the workplace and public places in general. Fortunately, no deaths were reported here as the cause of the intense flu-like virus, but the threat of islandwide contamination was a wake-up call for many. Cholera is one of the nastiest infections out there, and is often thought to afflict those in third-world living environments where access to clean water and proper sewerage is nil. Transmission occurs by drinking water or food contaminated by the feces of an infected person. The main symptom s are watery diarrhea and vomiting, and, without treatment, can cause death. (I told you it was nasty.) According to WHO statistics, Cholera still affects 3-5 million people and causes 100,000-130,000 deaths yearly.

The BVI is not out of arms reach from this shitty disease. (Sorry, I had to.) After the devastating 2010 earthquake in Haiti, residents there reported more than 18,000 cases and 1,000 deaths due to the infection. At the time, the BVI Government Information Systems released this, in part, as a warning to residents:

Although it is not commonly found in the Caribbean, cholera transmission is closely linked to inadequate environmental management. Typical at-risk areas include slums, where basic infrastructure is not available, as well as camps for internally displaced people or refugees where minimum requirements of safe water and sanitation are lacking.

Residents of the Virgin Islands are therefore encouraged to practice proper general sanitation. This includes the disposal of faeces and other body waste in an appropriate manner, proper hand washing, especially before cooking, eating and after using the toilet. All food should be thoroughly cooked and only safe or potable water should be consumed.

It’s a fair warning, especially considering that the BVI was once ravished by a devastating cholera outbreak. You might have noticed the largest burial ground in the territory on Tortola, at the base of Joe’s Hills. Probably an acre or more in size, it’s kind of hard to pass up. On the side of the burial grounds is a plaque in remembrance to the 942 Virgin Islanders, or 15% of the population, who died in the Cholera Epidemic of 1853. A smallpox outbreak on Tortola and Jost Van Dyke followed shortly after, taking with it another 33 residents. It’s not often that I take the time to dwell on sickness and sadness–especially when faced with such beauty and positivity in my BVI existence. But today, I subject you to misery simply because I selfishly need the company. And before the cough syrup gets too much to my head, I’ll sign off, reminding you that no matter where you are, things could always be worse.

Finding a Job in BVI