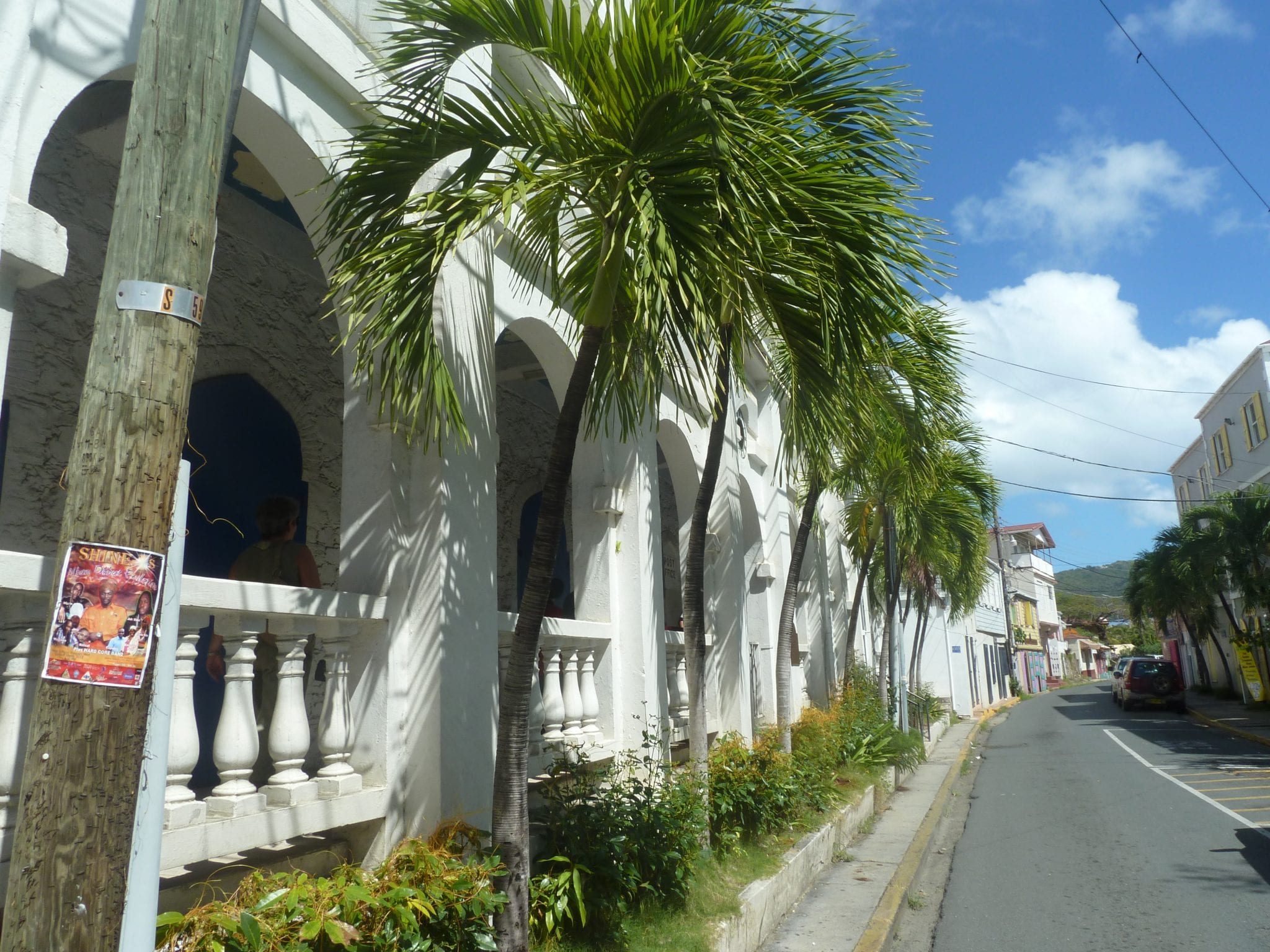 Tortola offers many options for the hiker and walker eg Sage Mountain National Park and The Bat Cave, Anderson Point with the Mt Healthy Sugar Works are certainly in the ‘must-do’ category, as are several in rural areas eg. Belmont Trails and Sabbath Hill/Hetherington Spring Ghut. However, there is no better way to start than with a heritage trail around Road Town, summarised here. As an easy wander through some important front and back streets of the capital, this gives you a chance to absorb some of the history, admire buildings and spaces of note and witness the on-going story of Road Town.

Old Government House and its excellent Museum oozes history, charm and character… as do its volunteer assistants. It is located on Waterfront Drive, south of the ferry dock and opposite the recently created Queen Elizabeth II National Park. The original grand building, dated from1899 was all but destroyed by a hurricane in 1924, the only part to withstand the force being the stone built pantry in which the Governor’s wife and children took refuge and survived to tell the tale. The house was then entirely rebuilt on the original foundations, the first concrete structure in the Territory. Despite it having withstood almost 80 years of wind and weather, by 2003 a decision was made to construct an entirely new residence for the Governor in part of the original mature garden ground. From then on Old Government House (plus the Lower Estate Sugar Works, see below) became the go-to museums in BVI for factual historical info and to view artefacts dating from way back…both definitely worth a visit.

Back on Waterfront Drive, turn left at the next junction on to Main Street and follow its meanders past Peebles Hospital dating from 1922 and spot (as if you might miss it!) the new shiny hospital towering behind. Note the eclectic street frontage with buildings of all shapes, sizes, colours and functions stretching into the distance. A 0.25mi walk north along Main Street (which used to be the seafront until a few decades ago) will bring you to Sir Olva Georges Plaza…a wonderful spot shaded by mature trees and palms and surrounded by historic buildings including the majestic but mouldering Old Post Office. This route remains the beating heart of old Road Town and is still a commercial thoroughfare which hosts all manner of specialised shops, tourist attractions and seasonal markets. Wander through the Plaza and look out for what is now the International Ferry Terminal. Feel the current buzz of the place around ferry times and imagine the scene half a century and more ago with sloops loading home-produced sugar, timber, fish and all manner of agricultural and other produce for dispatch to the USVI and beyond.

Saunter slowly along searching for a bargain (or a coffee at the corner) and catch the vibe of the place noting particular traders, unique shop fronts and interesting structures including the BVI Folk Museum seemingly perched on a rock outcrop. Some 0.25mi farther on look out for and visit several important historical buildings: St Georges Anglican Church (18thC) Her Majesty’s Prison (1774), Road Town Methodist Church (18thC) and several historic commercial structures many of which are now protected under city by-laws.

If still up for it (and you sure should be) continue a further 0.25mi along Main Street past the junction with Joe’s Hill Road (to the north coast and Cane Garden Bay) and Lower Estate Road and look out left for the Sunday Morning Well. This is a small but particularly significant structure, in the form of a shaded shelter with commemorative bronze plaque. It records the reading of the Emancipation Proclamation on this site in 1834 that eventually lead to the abolition of slavery in the Virgin Islands and the freeing of over 5,100 slaves. Think about it!

Continue along Main Street to its junction with Fishlock Road and look out on the left for the fine neo-classical building housing the Virgin Islands Supreme Court and House of Assembly. Check out the busts of four citizens prominent in the 1949 march to restore Constitutional Government and a greater degree of independence.

A further 0.2mi along Main Street (past the multi-storey ‘cineplex’) and you’re at the Station Avenue intersection, with the JR O’Neal Botanical Gardens directly opposite. This is one of ‘Nature’s Little Secrets’ and should not be missed so turn left and find the entry gate. The gardens are named after the active and highly respected local businessman who was also chairman of the National Parks Trust for 30 years. While the gardens extend to a mere 3 acres they are a hidden gem and an oasis of calm amongst the charming chaos of Road Town. They evolved from the Experimental Station run by W C Fishlock from Kew Gardens in London between 1902-1912, after whom the characterful two storey wooden building in the garden is named. Spend some quality time wandering, lonely as a cloud, marvelling at this lovingly manicured environment.

Now, almost at the end of this whistle-stop tour of Road Town highlights, head for the Lower Estate Sugar Works museum. This lies 0.25mi east so retrace your steps to and then across the junction with Main Street along Station Avenue, past the Briercliffe Memorial Hall cultural centre and the seasonally sumptuous flamboyant trees. The museum is another ‘must do’ attraction for those interested in the pre-history of the Territory, the plantation period and the interaction between man’s relationship with the land and the economic, social and political implications. The building, dating from 1780 and once on the waterfront, tells its own story and the on-going interpretation of its ever-expanding catalogue of exhibits by a committed and personable staff, elevate the whole experience to a higher level.

That’s it folks, you’ve had the opportunity to take in some of the more interesting historical sites and events that have shaped Road Town. Alternative trails can be explored in my BVI hiking guide, Trails & Tales.